Look What Fell Off!!! 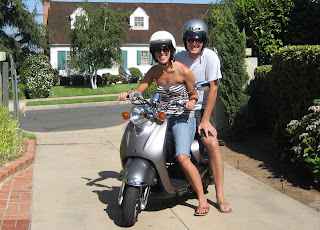 G and I - the day that we got The Scooter (San Diego - June 2007)
I don't know if I will ever look that happy on our scooter again.
This week in KC, the weather is still pretty overcast but is finally starting to warm up, and so Thursday I decided the conditions were good enough for me to drive The Scooter to work (approximately 4 miles).
I texted my Dad to tell him because I was so excited (and because he is a fellow scooter-owner), but I didn't see his reply of, "BE SAFE!  XOXOXO, Dad," until it was too late.
As I turned on to Main street, I noticed that it was starting to sprinkle - great.  I was a little over half way there when the car in front of me slammed on his breaks to stop from hitting a car who turned in front of him suddenly.  I learned that slamming on your breaks when you are on a scooter (especially on a wet road) is a little bit different than when you are in a car.  (I am getting light-headed just writing about this.)  To make a long story a little shorter... I crashed The Scooter, not into the other car, but into the ground.  Ouch.
***Family Flashback - This is not the first time I have crashed on a two wheel vehicle!  Bompa (my grandpa) and I were out for a spin on one of our dirt bike/motorcycle-thingys when I was about 4 or 5 and we laid the bike down when we hit a patch of gravel.  Bompa and I both scratched our hands up pretty well, but we were in heavy coats because it was cold, so we ended up being fine.  The fender popped off of the bike, and he had me carry it on my lap as I sat in front of him on our way back to the house.  I remember SO WELL the moment we pulled up in front of the house and the rest of the fam was standing out in the front yard, wondering what had happened... as we pulled into the driveway, I held up the piece of the bike and yelled, "Look what fell off!!!"  I was so proud of how tough I was being and I knew Bompa was pretty proud of me, too.***
The rest of Thursdays accident is pretty much a blur, but after I stopped skidding down the road (I had rolled on to my stomach during the skidding so I pretty much messed myself up from all angles) I looked up and saw two guys run out into the street to help me.  One carried me to the grass on the side of the road and called G, and the other man went and lifted all 225 lbs. of The Scooter up and pushed it to the side of the road.
Two fire trucks, one Security Guard, two ambulances, and one policeman later....  I was still a total mess.  My leggings were pulled up around my thighs, I was bleeding from probably a dozen different road burns on my body, and as one of the EMTs proceeded to pick the gravel out and squirt saline solution all over me, the realness of the pain finally hit me and I blacked out.
The good news:  I am alive (there were a few moments when I was laying in the street that I thought I was going to get run over), The Scooter is okay (except for some scratches in the paint, but is still totally drivable), and I am going to end up with some pretty sweet scars.
Bad news:  I am in an unbelievable amount of paint, I have big ugly bandages all over me, I had to miss two days of work which used up some sick days that I had been stockpiling, and my favorite black, peep-toe high heels are totally ruined (yes, I was riding in high heels, leggings, and a mini-dress - in retrospect, a bad idea).
Anyways, the past few days have been pretty bleak, but G has been taking SUCH good care of me and my precious friend, Joanna came by to bring us both lattes (and laughs) yesterday, and TOTally cheered me up (Thanks, Jo!).   My mother-in-law is here from California this weekend, and we have pretty much just been relaxing and spending time with her.
My right hand/wrist are pretty messed up (not to mention my left foot, left ankle, both knees, right hip, butt, and left arm), so posting might be a bit sporadic for the next few days.  Thanks for understanding, and I am looking forward to resuming regular blogging again next week (I have some good ones planned, so stay tuned)!
Sorry to be "Debbie Downer" today, but I hope everyone has a GREAT weekend!  (And don't forget to wear your helmet!)  MWAH!
Posted by Jessie at Saturday, April 19, 2008

OH MY GOSH!!!!!!!!!!! That is sooo awful I am so glad you're ok!!! What a terrifying story, I almost blacked out just from reading it! I'm going to call u soon to see how you're doing, poor baby! At least you looked great doing it though (that outfit sounded adorable!) Love you Jess.

Just found your blog (via your comments on mine - thank you so much). That is so scary. When I read about what you were wearing, though, I couldn't help but giggle. That is so something that I would do and I always think - if you are going to go down, might as well do it in style! I hope you feel better soon.

View my complete profile
Life is filled with Lucky Stones... You'll see them if you look through life with a hopeful eye, and always consider that the mystery of beauty is often lying just beneath the surface.


New Posts, Straight to your Inbox 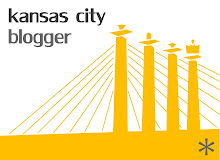